The Club held its first meeting in seven months on Oct. 31, a kind of pandemic-era catch-up gathering that we called an End-of-Season, Meet & Greet, Bring-Your-Own-Chair and Wear-Your-Mask meeting.

It was held at the Atagahi Park pavilion on a Saturday morning. And although temperatures hovered close to the 30s that day more than 40 members and guests turned out.

“I think folks are just anxious to get out and do something,” said Club Treasurer Vernetta Milts, who with other Club officers reported on latest activities.

Our new president, Myron Pstrak, opened the meeting with a series of updates on activities. He mentioned September’s drive-by version of our annual Fish Fry, the latest stocking, the record number of large fish caught so far this year and a number of other subjects.

Chris Wunder, who is putting out our annual calendar and the club’s book celebrating Connestee’s 50th anniversary, reported on those projects.

And Randy Bunn gave a roundup on the Fish Fry, which Vernetta said yielded a net profit of $4,000 to benefit the Club’s various projects and programs.

The Executive Committee decided to try the socially distancing format during its early October meeting and set the Saturday date. Many members brought their own chairs and all wore masks. Before and after, we served our usual “coffee-and” light refreshments.

At the end, members applauded the effort and several cried out their thanks to the officers.

“I’m glad we did it,” said Myron. “I think it went well and members certainly seemed to appreciate getting out and talking fishing.”

Where to buy Tackle

Call to order was made by Vice-President Myron Pstrak with 25 members and guests in attendance.

No Sunshine cards sent this month.

Ray and Al reported that several
postings have been added to the new sign board in Atagahi Park. Take a look! If you have a relevant posting you would like to add, please contact Al Byrne.

No lunkers have been reported since the last meeting.

Thursday, March 19th, convening at 10 AM in the Blue Ridge Lounge.

We had a very interesting and informative
presentation by Bruce Mcdonald of the NC Forest Service. Bruce reviewed many interesting facts and future plans for the Dupont State Recreational Forest.

Call to order was made by President Jim Bailey with 36 members and guests in attendance.

No Sunshine cards sent this month.

George reported that the new sign board has been installed in Atagahi Park near the family fishing dock. Spencer may construct the sign boards for the other lakes, rather than purchasing as we did for the prototype.

Thursday, February 20th, convening at 10 AM in the Blue Ridge Lounge.

Adjourn to the meeting program:

We had a very informative presentation by Hannah & Chris from Headwaters Outfitters. They described fishing for muskie in the upper branches of the French Broad. And they also touched on fishing for smallmouth. Thank you Myron for arranging this very interesting program. 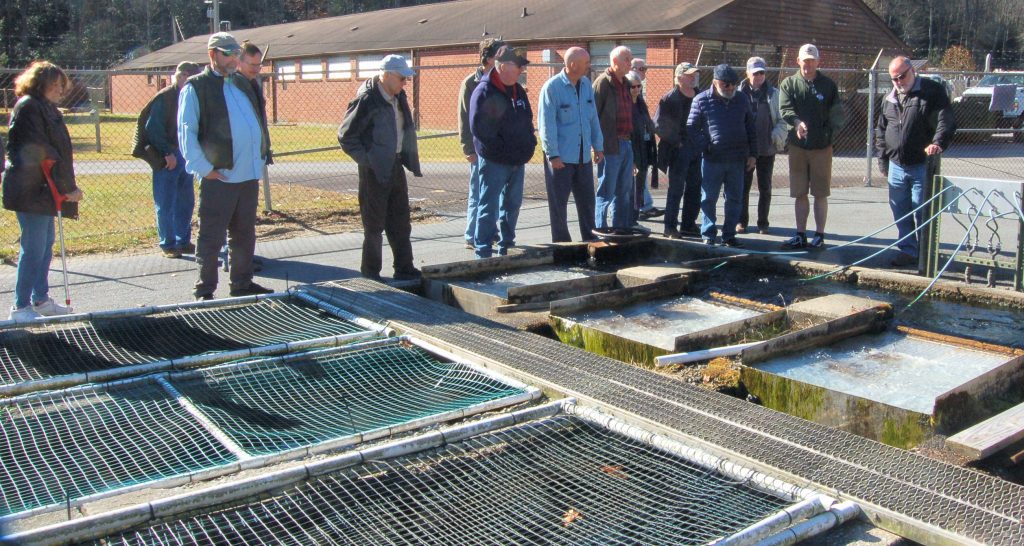 Call to order was made by Vice-President Myron Pstrak with 24 members and guests in attendance.

John Eades held the winning ticket and collected $29. The balance of the pot ($28) was donated to the Pisgah Center for Wildlife Education.

A serious silt problem in lake Wanteska was identified back on June. Connestee Maintenance has been addressing the problem and water flowing into the lake has been running clean during the last couple of rainfalls. There is still a concern that we’ll get significant mud flow with a very heavy rainfall.

Thursday, January 16th, convening at 9 AM in the Blue Ridge Lounge.

Adjourn to the meeting program – Tour of the Fish Hatchery at the Pisgah Center for Wildlife Education. Note that the correct name for the hatchery is the Bobby N. Setzer State Fish Hatchery.

We had a very interesting tour of the hatchery, with a “behind the scenes” view that the public doesn’t usually see. Thank you to Matt Christian for guiding us thru all the stages of trout production and offering his insightful commentary.

Thank you Myron for arranging this very informative program! 11/21/2019  A.Byrne

Call to order was made by President Jim Bailey with 25 members and guests in attendance.

Marian reported no cards were sent this month and explained that the sympathy cards are sent to members for family illnesses and deaths. Marian encouraged us to let her know as we become aware of any future needs.

No tagged fish have been reported
since the last meeting.

No lunkers
have been reported since the last meeting.

Our next monthly
meeting:

Thursday, November 21st, convening at 9 AM in
the Pickleball parking lot for a field trip to the Pisgah Wildlife Center and
tour of the hatchery.

We heard several interesting fish stories.
Thank you to those who shared.

Call to order was made by President Jim Bailey with 34 members and guests in attendance.

The Pledge was led by Frank Wolf

According to the U.S. Coast Guard, a boater's odds of dying during a boating mishap go up in October and November. With the waterways much less crowded, why are these the deadliest months? Usually, it's because the boater is unprepared for the condition.

Jim Bailey thanked Carol Marines and Jim Ungaro for their exceptional service to the Club and introduced new Club officers Myron and Vernetta.

Frank reported on the cards that were sent.

Call to order was made by President Jim Bailey with 34 members and guests in attendance.

The Pledge was led by Frank Wolf

On a vessel underway, children under 13 must wear an appropriate Coast Guard-approved PFD, unless they are below decks or in an enclosed cabin. Additionally, a boat 16' in length or greater, except canoes and kayaks, must have a throwable flotation device. See specific state requirements for life jackets.

When purchasing a children’s life jacket, look for the following:

For More Information, visit the US Coast Guard web-site

Marian reported on the cards that were sent. And it was suggested that a card also be sent to Scott Smith.

We have several inexpensive canoes and a complete 13’ sailing dinghy in our RV1 storage rack. There are also 2 aluminum jon boats being donated which we haven’t picked up yet. A complete list all available boats is on our website. Call Al Byrne if interested.

Adjourn to the meeting program – introduction of Jim Whitmore by Carol Marines:

Jim gave an excellent review of recently completed and upcoming Connestee projects. And Jim responded to a wide range of question and comments from the meeting attendees.

The Pledge was led by a Club member

A Club member asked that a card be sent to Jim Rumph.

We have several inexpensive canoes, 2 aluminum v-hulls, 3 sit-on-top kayaks, and a complete sailing dinghy in our RV1 storage rack. A complete list all available boats is on our website. Call Al Byrne if interested.

Nick reviewed the recent Outreach events and commented on how well the “casting camps” have been received.

Bill Hudson caught a 20” tagged trout on Lake Atagahi, with this year’s tag.

Thursday, August 15th, when we will host GM Jim Whitmore in the Atagahi Park pavilion.

Adjourn to the meeting program – introduction of Sheriff Mahoney by Carol Marines:

Donations to support the camps can be made to the Blue Line Foundation of Transylvania County.