Thank You to our Volunteers!

Volunteers are the backbone of the Outreach Program and a significant source of the goodwill our Club spreads in the community surrounding Connestee. 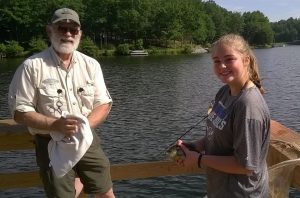 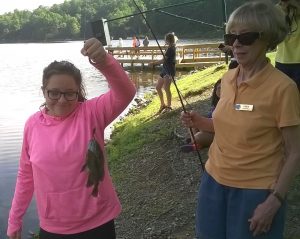 (Volunteers Kevin Henebry and Carol Marines, incoming Vice President for 2018-2019, are pictured above.)

During 2018, Outreach held 19 events with another two planned outings cancelled. Based on the time of individual volunteers who staffed each event plus scheduling, administrative, bait procurement and equipment maintenance time, an estimated 400+ hours were put in by Club members this year.

While the number of Outreach volunteers has decreased, their commitment of time and support, despite less-than-perfect weather conditions and too-frequent drenchings, has grown stronger. But it remains critical that we grow our volunteer base. Volunteers freely and generously donate their time, but burnout happens, and we can’t afford to lose our most valuable strengths. It is vital that we encourage more volunteers to help with all facets of Outreach—as well as other Fishing Club activities and programs—and explore new ways of broadening our volunteer base. 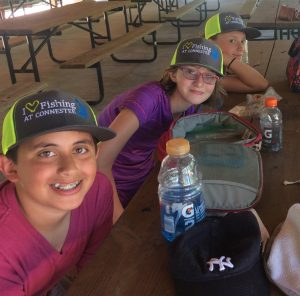 Improvements in Equipment. This year we purchased the heavier-duty Abu Garcia spincast reels. Our experience with them made us feel that perhaps we have the answer to our constant reel issues. They are more expensive, but if they continue to require less maintenance and don’t need to be rebuilt and replaced so often, the expenditure is worthwhile.

Balls and Now Frisbees in Play. Still building on the enhanced playground facility at Atagahi Park, we added to the opportunities for kids to let off steam after a morning spent patiently fishing. Through donations, this year four soccer balls and two frisbees were contributed to our inventory of ancillary sports equipment which also includes basketballs and a volleyball.

Keeping our Clients Dry and Warm. The addition of emergency rain ponchos to the pre-existing Mylar blanket supply was very helpful and much needed. Both were used this year and allowed us to carry on our events despite unfavorable weather.

…and Protected from Bugs and Sunburn. We made sure that we always had insect repellant, sunscreen, and First Aid supplies on hand.

Live Bait Donation. This year we had another generous donation of worms and rewarded the donors with a gift certificate. Thank you once again to Ted Migues for securing this donation.

…and Artificial Bait. Based on 2017’s experience, we added rubber worms and other artificial baits and have been trying to expand this part of the program. Not all of our clients are comfortable with live bait.

Lunker Certificates. Part way through the season, Fishing Club decided to award lunker certificates to qualifying catches at Outreach. For the 2018 season, one Boys and Girls Club member, Caitlyn Owen, and two women from Special Olympics, Kim Chamberlain and Karen Caffrey, were presented with certificates. Carol Marines reports that Kim proudly displays her framed certificate at her place of employment in Rosman.

Twelve anglers caught seven brim, four bass, and three trout, the largest of the trout was 20.5”. Beautiful Spring day. Eagle spotted over the lake. We had to discourage drone flyers. These and radio-controlled float planes are become more of an issue.

Trent Ledbetter led the group with assistance from one of his volunteers who normally deals with disabled adults. As we experienced last year, a pleasant group who really support one another, and a number of folks who had never previously fished had success. They picnicked in the Pavilion while we distributed the debut hats of this season, and they finished off playing basketball and soccer.

Nine clients. These folks require a lot of chaperones, more than were on hand for this outing, and we had to really watch the clients particularly to avoid their exposure to sunburn.

We carried on, and the catch was 6 brim, 6 bass, and 1 trout. The group did not stay for lunch in the Pavilion.

Cedar Mountain House is an assisted living facility located near Connestee Falls. Historically, we try to be good neighbors, particularly since family members of Connestee residents are sometimes in residence at Cedar Mountain House. The attendance at the event—and whether is ultimately takes place—depends on the commitment of the staff activities director (as with other, similar groups). Despite a successful outing in 2017, this year there was a new activities director on board and we learned at the last minute, that morning in fact, that only one resident had signed up.

Lots of chaperones. Ten anglers (not all participated). Again no lunch at the Pavilion. Four brim caught.

P.A.R.I. is one of the settings for Duke University’s TIP program of summer studies for gifted children. Our outreach for brainiacs, we hosted 29 aspiring astrophysicists that day, 14-18 years old. As always an interesting group whose conversation ranges from teleporting to black holes with the periodic references to what they were doing, i.e. fishing on a very hot day.

This is the first time that we’ve set up a cooling station, which worked very well for volunteers, chaperones and the kids as well. Many were getting overheated, and we could send them up for a respite in the shade and fan-induced breeze. We are always working at ways to try to improve the guests’—as well as volunteers’—experience, i.e., mylar warming blankets, emergency rain ponchos, and, this year, the cooling station. The cooling station consists of two large fans set up under the picnic shelter donated by Fishing Club and powered by extension cords led from the nearby lamppost.

These are lovely, young and gifted people, but they also have a talent for losing backpacks. Total catch was 16 brim. Lunch was in the pavilion, and afterwards they played volleyball, soccer and basketball.

Twenty-one mostly seventh-grade anglers accompanied by a group of our favorite law enforcement folks. It was hot, and we put the cooling station to use again.

Just to illustrate the challenges these kids have to face: Rosman School Resource Officer Desiree Abram, a Shield Camp staffer and member of the Outreach Advisory Committee, volunteered to pick up one young man whose mother had decided that she didn’t want to get up that morning. A sad reminder of how needy some of our young Transylvanians can be.

We were able to persuade the kids to fish worms on the bottom rather than use bobbers with great results. A total of 39 fish including three bass and one trout. A happy group lunched in the pavilion, where they received their hats. One basketball was retrieved from the lake by a slightly soggy deputy.

Nine students from Brevard Elementary. These kids are in a special needs program led by Rebecca Freeman from Meridian Health.

We had one “floater,” a child who had been with the program just two days. He adjusted well to the soaking and seemed none the worse for wear. They caught two bass and 10 brim.

The group lunched at the pavilion, where we gave out hats and listened to details of their home lives, which they seemed to want to share. Why they opened up to us I don’t know, but it certainly was an eye opener.

Seventeen anglers. A pleasant day. A nice group of kids. No drama. The catch was 7 brim, 6 bass and 1 good-sized perch. We gave out hats, and all of the sports equipment was put into play including the frisbees.

Thirty-one kids again led by chaperone Laura, who keeps the kids focused. They clearly like her, as do we. We had her last year and hope she’s back next season. The catch was 29 brim, 8 bass and 1 trout. The group had lunch in the Pavilion. Neither t-shirts or hats are given out at these events due to the fact that the participants are not Transylvania residents.

Eleven anglers came down from the new teen location, where they, among other things, maintain a kitchen garden. These were nice, more mature kids. There were two new anglers who kissed their catches. Fish caught included 17 brim and 9 bass. Hats were distributed. They did not stay to have lunch at the Pavilion.

At this camp, volunteers help kids with problems reading and writing. We always enjoy this group. Wendy Adair is always upbeat. Just like last year, it poured, and Wendy decided that the rain was part of the tradition. This was an afternoon event, but the 11 anglers still managed to catch 11 brim and a 12” bass.

Fifteen 5th graders with two chaperones. Rain threatened but held off. The kids were patient, surprisingly so, and were rewarded with 14 brim. The group had a good time. Lunch at the pavilion while we gave out t-shirts (most of the remaining t-shirt inventory from last year was smaller sizes).

A group of 9 young anglers came with Mary Arnaudin accompanied by two parents. One of the parents preps the kids to show livestock, so we got a primer on animal display by adolescents. The kids ranged from 7-12 in age, and the girls, particularly the younger girls, were very competent anglers. We gave them hats as they lunched in the Pavilion. The total catch was 14 brim and 1 bass.

Ten anglers. An enthusiastic group had a pretty good day landing 4 bass, one perch, and 18 brim, one of which was a lunker. As usual, lunch was enjoyed at the pavilion, hats were distributed, and sports equipment was put into play.

The astrophysicists struck again, 27 of them discussing things that the majority of our volunteers didn’t understand much of. The kids were distracted by questions such as the meaning of infinity. Whilst plumbing the depths of these weighty questions, they landed 24 brim, 6 bass, one trout and one perch. A blue heron made an appearance, rounding out the morning. All the sports equipment was put to good use.

Ten older kids came out. Fishing was slow, but it should be noted that the fish feeder was out of commission. Six brim and 1 bass were caught. They had lunch and left shortly afterward to attend another event.

Nine anglers—two of whom did not fish—landed 5 brim. This has not been our best season for TVS. There are some enthusiastic anglers, but they are easily bothered by others in the group acting up.

We were scheduled to welcome 5-6 students with behavioral issues from Brevard Middle School. After much phoning around, we learned that Meridian had suspended all programming for that week, and Ms. Freeman was in Amsterdam, having neglected to cancel our program in advance of her vacation. She offered an apology and we agreed to keep the door open for next year. 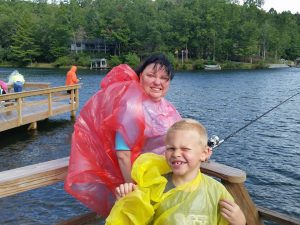 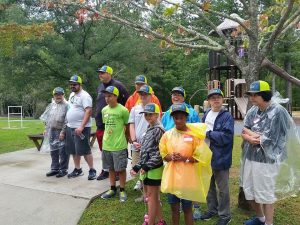 Nineteen athletes participated along with supporters and coaches. It was quite a group! As always, Frank and Marian Wolf catered to both participants and volunteers. The weather wasn’t great, hurricane Florence being a factor, however, we dodged a bullet.

Hats and t-shirts were offered to the participants and welcomed enthusiastically as they ate their lunch prepared by Marian and other volunteers. Fishing was a little slow with one trout, 6 bass and 5 brim; however, 2 of the fish were lunkers caught by Kim Chamberlain and Karen Caffery.

In case of rain, call Center.

Seventeen anglers participated on a cloudy, chilly and generally dismal morning, with an equally dismal catch of 2 brim. But everyone apparently just enjoyed being outdoors. They only fished for an hour and a half but enjoyed themselves. Chaperones were concerned that physical discomfort due to the cold might upset some, though they did not accept our offer of Mylar blankets.

Postscript: We have seen both sad and uplifting things this year, from a boy whose father refused to buy him a belt, so had to hold up his too big, hand-me-down pants, to kids who exude joy despite uncooperative weather and difficult home lives. I like to think that we are making something of a difference, at least for a few hours. 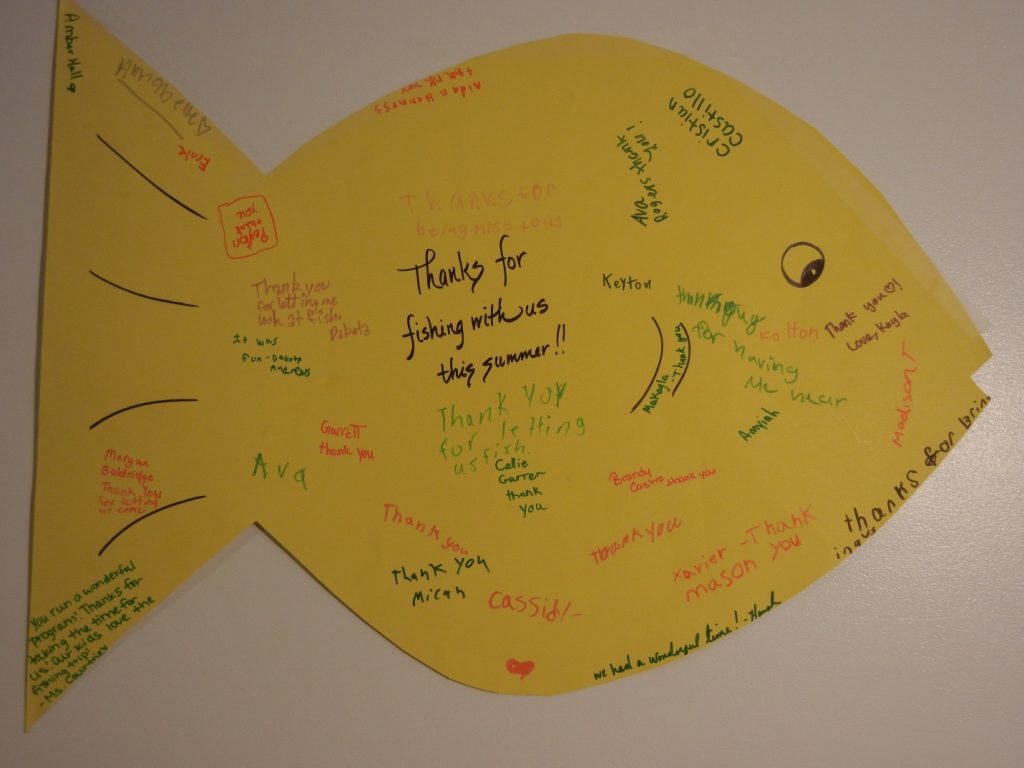